I’m trying to help you here, Mr Amis. We’re creating buzz! Everyone’s talking about me talking about you! (I have no evidence to back that up). You look all cool and onliney, like Johnny Mnemonic, because I’m writing about you.

I really do like your work. The Pregnant Widow opens strongly; your style’s still good. But ok look, when you decide it’s time to spice up conversation with a Science Fact, even if it’s a light and jolly one, you’ve got to be careful.

‘I read something the other day,’ said Whittaker, ‘that made me warm to breasts. It made me see them in a different light. In evolutionary terms, this guy says, the breasts are there to imitate the arse.’
‘The arse?’
‘The breasts ape the arse. As an inducement to having sex face to face[…]’

It’s not your fault, since I imagine you don’t watch much TV, but it’s a really bad sign when your character’s talking points are the same as, well, 1:20 in this:

People have been worrying that there’s a conflict of interest in my Martin Amis series. “The Midnight Bell,” they say, “The Midnight Bell you conducted one of the most in-depth interviews with Amis on record; anyone can see that a close personal bond developed between the two of you over the course of it. You’re too personally invested in his to work to be a just critic.”

Now, I can see where you’re coming from. It was an important interview (I’m duklaprague, as if you needed reminding), and we were close afterwards, certainly for the rest of 95. He never really got in touch, but I always knew what he was thinking using my magic brain.

However, I believe I have always separated the man and the art (made ‘m’ and ‘art’ from Mart, if you will); and I have been among his harshest critics whenever he’s written anything substandard since, which has happened yknow let’s all be cool here but you’d have to put the dot on the graph somewhere between ‘quite often’ and ‘always’.

Wow that was a long time ago. 15 years! We were both such computer naifs then! Now, now I have a little blog and he ‘logs on’ to read Nemi each morning. How things change.

Should I switch to a tumblr?

All the cool kids have one.

I don’t think I should switch to a tumblr. It’s fun here. It’s like living in a crazy old haunted mansion.

Here’s C Hitchens defending Amis from the charge of misogyny:

So far from being some jaded Casanova, Martin possesses the rare gift — enviable if potentially time-consuming — of being able to find something attractive in almost any woman. If this be misogyny, then give us increase of it.

Yeah, no. ‘He can’t be a misogynist – he wants to fuck ’em all!’ is up there with ‘I’m not a homophobe – I’m not scared of gays’ in the annals of shit arguing.

Now, ‘misogynist’ is a bit unnuanced, but it’s still the closest thing to what we want. He’s a shockingly bad writer of women: he doesn’t seem to hate them, he just doesn’t take them very seriously as real people with wants and desires that are different from but equal to the wants and desires of a normal human being, ie a white middle-class intellectual male who likes snooker and Nabokov and is mates with James Fenton.

Amis female characters, the creative process, my best guess: “So, she’s clever. Should I give her great tits? Well, I’ve given the not-as-clever girl great tits; so naturally the cleverer girl should have worse tits. Not bad tits. That would be overdoing it. Maybe just plain good tits? For realism. No. The deep literary move is to give the cleverer girl greater tits, even though she’s not as pretty. Maybe the best tits in the world! Yes! I give her world-beating tits, a degree in moleculologic computing and she wants a baby!! EAT IT BELLOW!!! ”

Faint virtue in this: he doesn’t think women are men in disguise. Problem: not sure he thinks they’re human.

He does try, but there’s also bit of the classic misogynist-lite pattern in there, I think: start off dismissive of women, get to some point later on where you’re praising woman (essentialism!) as the great & pure nurturing principle of the universe, so much better than brutish men, etc, etc, – all the while, of c., not wondering what individual women want, enjoy, etc

The thing is, he often doesn’t seem to understand how complicated, unbasic and sophisticated the desires of men are either. He’s very good on a narrow range of male thought – let’s call it ‘thinking about tits and arses’, tataa, that’s nice – but falls back on it too much, overestimates its place in life.

Now this is sort of a tricky area, because when you say ‘no look rly, that is not what all men think about all the time’, women are justifiably ‘o yes i have heard that 1 before’, and some men are like that all the time and think you are running a number to cock-block them on that blonde (what if I am bud). AND YET I hold to the position that this is but one part of life; Amis is good at playing with it, but the obsession distorts him. Again, we’re looking at a specialist – a strong minor artist (with one masterpiece, Money that he very nearly manages to fuck with metafictional tosh).

So this part of the floorplan just says “Look, I know, agree he’s terrible at women. He’s not that great at men. He does have virtues, but if you want to ignore him, I wouldn’t say you’ll miss out on too much. I find him fascinating, but I don’t take him too seriously.”

I am looking forward to The Pregnant Widow

An aside. The HOW-IT-ISism of Amis actually adds some fun to his novels for the engaged reader. Use one of the following phrases each time he makes a HOW-IT-IS observation:

Alternatively, treat the maxim as testable – think of counterexamples, or supporting evidence.

Really must start this book.

So, we probably need to get a few things straight if we’re talking about Martin Amis. I haven’t started reading the book yet, but I’ll spread out my general thinking-about-Mart grundrisses here.

First up, I like his novels. He’s more fun and interesting than his contemporaries. One of the best here and now.

We’ll qualify that. I don’t think it’s an impressive time or place to be a big man:

1) We’re at the arse end of the novel. tbh after I publish mine, there probably won’t be that much left to do with the form, so if anyone else out there’s written one & you’re dropping after me, might be best to rethink (maybe turn it into a tapestry? Suspect that will be the new glamour form).

2) I don’t think Britain in particular has been in great shape post-1950 or so. Minor writers abound.

So a strong, limited talent, who looks better or worse than he is depending how you squint at him.

A word on his limits. I’d say – to put it in a old-fashioned way – he has trouble reconciling the general and particular. he’s very good at the specific & the grotesque. It’s not just the characters he draws – he also likes lists, strange words, odd names, lots of environmental detail. Not terrific on visual images, but metaphorically inventive. He’s an absolutely rotten generaliser, though, a rotten generaliser who just can’t stop pontificating and pronouncing. He tries to shift it off onto his characters, but you know he just loves telling you HOW IT IS. Sometimes it’s funny; sometimes it’s a bit airline-peanuts; sometimes it’s a flat bore.

The vice, as ever, is related to a virtue – the confidence behind the opining bolsters or drives his style. Really, it’s just what you’d call ‘having a strong voice’. But it also cripples his range. He doesn’t really have an imagination for other people because he want to think of HOW-IT-IS things to say about them as soon as he’s imagined them.

His characters tend to come from a limited palette – clever oik, stupid oik, 2-D cruel posh boy, supersexygirl, sexygirl w/ degree (it seems to be built from a simple arithmetic of class/sex/brains) – and they tend to turn out either HOW-IT-IS maxims or dinner-party gobbets from the last issue of New Scientist when given space on the page. 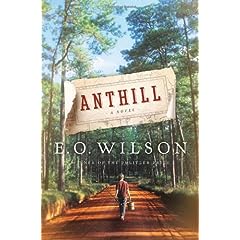 Does he really understand ants? Really?

Well, Martin Amis week here on The Bell is nearly over and what have we learned?

• Don’t start theme weeks if you haven’t quite got round to finishing/starting the novel that you were planning to talk about.

• Probably better to use no deodorant at all rather than persisting with the high-pitched spray at the end of a bottle and hoping you get a few specks of something other than propellant. The self-consciousness about your ineffective deodorant makes you sweatier.

• John Lanchester is a distractingly good writer. Whoops! is maybe not essential if you’ve been following his journalism, but was still v involving this weekend. I enjoy how casual funny he is. Look at this from his latest LRB piece:

Bank bonuses are a moral and political problem at the best of times. This year, the levels of bonuses across the industry are unconscionable. There are three reasons for that. First, thanks to the special measures currently in place the banks can borrow from their governments at, effectively, 0 per cent rates of interest. They can then invest the money at higher rates of interest, 5 to 7 per cent, say. This is a direct transfer of wealth from the taxpayer to the banks, and the only difference between it and an actual, physical licence to print money is that the banks don’t have a piece of paper with the words ‘Official Licence to Print Money’ written across the top. Second, the banks’ balance sheets are still clogged with the famous toxic assets. Last year, these assets could not be sold, so they were worth nothing; thanks to the accountancy practice[… u.s.w]

Ysee I think that that ‘Licence to print money’ line is nice, and also suspect 99/100 journalists would be so pleased with it that it would sit at the end of a paragraph, telling you how funny it is. Not Lanchester! He distracts us by explaining something well, does the funny, then carries on explaining. I want to listen to you tell me about some important boring stuff Mr L! Good work.

• Don’t really like the cover of The Preg Wid. Am I sure I want to read it? It’s not going to be as good as Money, is it?

I mean it’ll probably turn out to be two or three weeks, maybe a month. Could just be a few days tbqh. But we’re roughly Martin Amis themed for a little bit, k?

To kick off Martin Amis week here on The Bell, let’s take a look at who’s got the best sensationalist/google-optimised URL for their review of The Pregnant Widow.

Metro seem mildly confused about the business of alluring URls:

So the field’s wide open for the New Statesman to step in and nick it:

The Mail has nothing going on, despite having the strongest reputation in the field:

And their features staff have to show the bookoes how to do it:

You know what the problem is here? (I mean apart from the banal/vulgar conception of literary interest and the cowardly bit in the second par where he tries to hedge so that no-one points out the banal/vulgar conception of literary interest. Obvs.). I think it’s that the piece has a little comic idea – ‘James Joyce himself had not read the Wake‘ – that’s fine as a throwaway or aside, but mistakes the worth of that idea & builds a few hundred words around it, spins its wheels without a bit of imagination kicking in. Lazy.